Faculty Members Gathered for “Something Yet to be Seen” 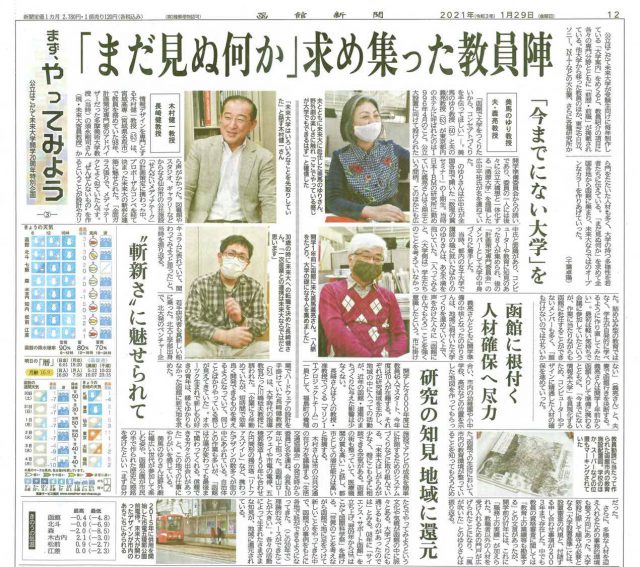 When you turn the pages of the “University Guide” that Future University Hakodate produces every year for students applying for admission, you will find that each faculty member’s field of specialization as well as his or her “previous experience and employment” are listed in the introduction section. In addition to faculty members who have moved from other universities, many of them have come from industries such as Toshiba, Hitachi, Sony, and NTT, as well as from various research institutes, conveying to young people the diversity of the university. They came to Hakodate from all over the country in explore of “something new” and created the openness and “colors” that are unique character of Future University.

A university unlike any other

We would like to establish a university in Hakodate, so we would like you to help us create the concept. It was April 1996 when Professor Noyuri Mima, 60, and her partner, Professor Yoshiaki Mima, 63, were called to a hotel in Tokyo. The invitation came from the preparatory committee for the establishment of a public university, and one of the committee members was Dr. Heisuke Hironaka, who later proposed the idea of “Yugen University,” which would be integrated into the public university concept.

Noyuri was one of the first students of the “Wings of Mathematics Seminar” that Hironaka held in various parts of Japan. Yoshiaki, who was working at IBM Japan’s research institute at the time, was a third-year student. Totally eight people who were acquainted with Hironaka and had knowledge of computer science and education were also gathered and started working on the content of the university as members of the “Planning Expert Committee.”

At the time, Noyuri, who had just taken a position as a lecturer at a women’s university in Tokyo, was dissatisfied with her job. “When I joined the university as a faculty, I found they seemed not thinking about the students. I want to rebuild the program students can learn on their own initiative, rather than through cramming. ” At first, she attended the meetings with a casual attitude, but when many of the members were unable to go to Hakodate to work on the project, Noyuri and Yoshiaki decided to go to Hakodate, saying, “If no one can go, no one can realize it” (Yoshiaki). He moved to Hakodate one year before the opening of the university to be involved in the preparations and to recruit people who are experts in computers and design in order to realize an “unprecedented information university. “

Kenichi Kimura, 63, a professor specializing in information design, was approached by Goji Sunaga, a professor at Tama Art University at that time and now a visiting professor at Future University, who was an advisor to the planning committee in 1998 when Kenichi was teaching at Miyagi National College of Technology in Natori City, Miyagi Prefecture. While he was involved in the planning of Sendai Mediatheque, a public facility consisting of a library, studios and galleries, he was fascinated by the innovative architecture of Future University, which was selected through a proposal competition. “It was all glass, very similar to the Mediatheque,” he said. The design and curriculum reflected the idea of “creating something completely new,” so he decided to get involved, he recalls.

The young researchers were also on a brand-new ship. Professor Ken Nagasaki, 51, a graduate of the Faculty of Engineering at Hokkaido University who was working on hardware design for a venture company that originated at Hokkaido University, was invited to join the project by Professor Toshio Kawashima, his advisor at the university. “I had been working for a company for three years, but I was starting to think about things that could be developed efficiently in a short period of time, and I was starting to see that I was doing the same thing all the time,” he said. Born in Okhotsk and fond of new things, the young man sought a new place in Hakodate, a city he had no connection with.

Efforts to recruit talented people to be rooted in Hakodate

Noyuri, who played a central role in the preparations for the opening of the university together with Yoshiaki, was very conscious of the need for the people he approached to “live in Hakodate” in order to create a university rooted in the local community. She contacted the city government and asked them to make a map showing the locations of kindergartens, elementary and junior high schools, and high schools in the city. The purpose was to let people know that the city has a good educational environment for living in Hakodate.

In addition, the administrative environment was to be improved to welcome a variety of talented people. The “Standards for the Establishment of Universities,” which must be complied with when establishing a new university, included internal regulations for the review of the establishment of new universities, as well as related agreements that existed until 2003. In particular, the qualifications of faculty members included the phrase “educational achievements shall be taken into consideration.”  However, in 1997, prior to the opening of the university, “professional achievements” were added to the list. This opened the door for non-teaching personnel, and “the wind blew,” Noyuri recalls.

Returning research findings to the community

When the school opened in 2000, it had 46 faculty members, and this year it has 70. Each of them has made the most of their research areas, and their activities in the local community have had a significant impact on the recent urban development of Hakodate and Donan area.

Ken is a member of the Marine IT Project Team, which consists of five professors and associate professors, and is working on a system to easily measure the growth of abalone at an aquaculture facility in Fukushima Town. He said, “There are few ties at Future University, and there is an atmosphere where you can consult with people without being stuck in a shell.” The city of Hakodate is well organized and the quality of medical institutions is high, he said, noting the city’s high potential.

Kenichi has been a member of the Council for Public Transportation since its inception, and has served as its chairman for more than 10 years. Many of the designs that he was involved in are still in use in the city, including the Mt. Hakodate Ropeway, streetcar stops, and the “Lithofassoire,” a cylindrical notice tower that commemorates the 150th anniversary of the construction of Goryokaku. Although he often works with the local government, he says, “Hakodate stays involved until the end even if my position changes. I have met people I can trust,” he says, and feels that his work here is worthwhile.

Noyuri was impressed by the way people of all ages enjoy participating in the outdoor drama and the history of Hakodate Park, which was built by the citizens. “Hakodate has a vibrant culture and spirit of doing things on its own, and I believe this is also true for the creation of the university”. In 2008, she launched “Science Support Hakodate,” and the following year, in 2009, she started the “Hakodate International Science Festival. “While I have been thinking about the world and doing new things in Hakodate with my feet on the ground, I have been able to talk about the case studies in Hakodate in various places. The fact that I have been able to build a theoretical base over the past 20 years has been significant.” The various insights that have emerged from each of our activities are being returned to the community. (Takuo Chiba)